A Great Canvas To Work From !!

We have done a number of boat tests on the Queensland-manufactured Clark Aluminium boats and the thing that has stood out on each occasion is the value for money they represent.
The latest offering from Clark is the Rebel Series and the 449 Rebel Centre Console is part of the range. I had the opportunity to put the 449 CC through its paces and to see whether it too offers the value that the other ranges in the Clark stable offer.

What a 449 offers
The 449 Rebel is available in four configurations – tiller, side console, twin console and centre console. The latter was the boat that Mark Frost, from Boats and More in Shepparton and Echuca, and I put on the water at Bundalong at the top end of Lake Mulwala. There are a number of benefits that the centre console configuration provides, with the most obvious being the ability to easily access all sides of the boat, meaning you can fish unimpeded.
Another key benefit is the additional storage that is on offer. The console itself has space under it as well as significant space in the seat box. Add to that a large storage area under the front casting deck, two side pockets and plenty of room for batteries, fuel and more under the rear deck and you have plenty of space to put away gear and keep it out of harm’s way.
The thing I like the most with the 449 is that you have a great shell to work with. It is up to you how much bling you do or don’t want. The centre console is small yet has plenty of space for any electronics you may want and offers some protection while driving the boat in a seated position. The front casting deck is large enough for one angler to comfortably cast lures from and you could fish two up in a pinch.
There is a bracket to install an electric motor and this would certainly be an option I would look at. This would set the boat up perfectly to fish areas like Bundalong (where we did the test) with lures. Mark and I enjoyed flicking a few lures around while drifting and tied up to structure after the test. The boat proved to be a solid platform to fish from and had a bit of fishing mojo too with a small Murray cod hitting the deck.
The other advantage of a boat this size is that it can be towed by a family car and is easily launched and retrieved by one person if necessary.

Ride and handling
Another factor that comes into play when purchasing a centre console boat is that all the weight in the boat is concentrated down the centre line. As long as it is distributed evenly, it really does enhance the handling. This was very evident in the 449 Rebel. The test boat had virtually nothing in it and the 60hp Mercury four-stroke really got it up and running nicely.
At speed and cornering it handled beautifully and was fun to drive. Mark who was driving in all the running shots in this test had a constant smile on his face and I think he would have happily spent the whole day running to and fro. Tight cornering was a slightly different prospect at speed. Too much speed and it cavitated quite badly. However, this was rectified quite easily with a little bit of throttle control and I found that it maneuvered around the abundant structure and channels that Bundalong and Lake Mulwala has with ease.
We were fortunate enough to have hit Bundalong after a pretty big storm, so as much as the water was discoloured, there was no real chop on the water to seriously put the hull to the test. Due to the centre console being slightly further forward and the reverse chines of the hull pushing any spray well to the side, the ride was comfortable and dry. 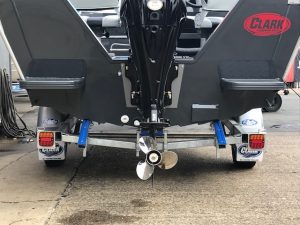 We found the Mercury 60hp motor on the test boat was ideally suited to the boat. We were not able to get speed figures on the day, but it certainly got along at a fair clip. There is also no questioning the economy of the Mercury four-stroke motors. Find the sweet spot in the rev range, which was 3500-4000 revs on the back of the 449, and you will get maximum efficiency. Just 3.6km/L of fuel burnt while cruising will see you out doing a lot of fishing.

What you see is what you get
The Clark 449 Centre Console is a very practical boat. It has ample storage, a practical console, has 3mm bottom and sides so it will take the bumps and bruises that inevitably happen. There is also plenty of fishing space and ample room to add your preferred sounder and an electric motor. Add to that the reliability of the Mercury outboard and the 449 is a solid canvas that you can set up to meet your needs. 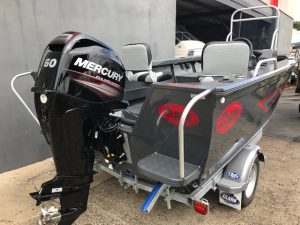